Confession time. I didn't want a 2014 word. In 2011, I prayed for a word for the upcoming year, and the Lord gave me HOPE as our word. By mid-January, our family was hit with something so hard, so severe that it became a two-year ordeal, finally ending one week ago today. The journey was painful and unpleasant, and one I still have difficulty sharing, because it's not my story to tell. But through it all God reminded us not to give up HOPE. And during the past two years, I've developed a new set of eyes to see more clearly people who are suffering, and a new heart to understand and empathize with certain kinds of pain people live through on a daily basis. As much as we feel life needs to pause for a moment - to allow us to catch our breath - it doesn't. Life goes on, and so must we.

Our authors went through their own trials too, and the publishing companies began to grow.

At the end of 2012, I was eager to see the year go, so I eagerly prayed for a new word. This time the word was JOY. Again, by mid-January, we were being hit with other problems - some business, some personal, some health. And we're still dealing with them 11 months later. I shared some of the health problems I dealt with earlier this year - and although I had hoped the problems were gone when I wrote that post, they quickly returned.

But this year, we did have many moments of pure JOY and we learned, as James advised us, to count it ALL joy, through all the trials and tribulations. Definitely an easier task said than done, but we worked at it, and were reminded regularly that we needed to keep at it.

Our authors went through more trials of their own, and the publishing companies began to grow - and experience some difficult growing pains of their own.

So when December 1 rolled around this year, I began dreading the 2014 word. I even told a dear friend that I was AFRAID to pray for a new word because life seemed easier without one. (Yes, I'm a chicken.)

Yet God didn't let me off that easily. During the middle of the night - the same night I'd just told my friend I didn't want to pray for a word - God gave me the word. Not trusting myself - wondering if I'd forced the issue - I spent most of the next day praying, asking God to either delete that word or to confirm it as our word for 2014.

Confirm it He did. In the following 48 hours, that word came at me from every direction, from almost every possible source imaginable. So much of it in fact, I quit doubting, and began exploring. This word is used hundreds of times in the Bible. Biblegateway tells us it is used 309 times in the KJV, 346 times in the RSV, 263 times in the NIV, 275 times in the HCSB, and 277 times in the ESV.

But He quickly gave me the Scripture we're to focus on this year, and then confirmed it through a very unlikely source. Only God. Interestingly, the verse is almost identical in every single translation. That's rare.

As much as I dreaded the word, and as much as I know how positive and hopeful and joyous the other words were, and I'm still reeling, healing, and recovering from the years of those words, I'm once again excited about what the new year holds in store for all of us. I see the 2014 word almost as a challenge - something to DO, a proactive word, rather than an emotion or feeling. During this year, we'll seek manuscripts with this word/concept as the focus.

Last week, another friend shared a banner from Logos Bible Software on her FB page - and it had OUR verse on it. So I'm going to post it here to reveal our 2014 word. Thank you, Logos. 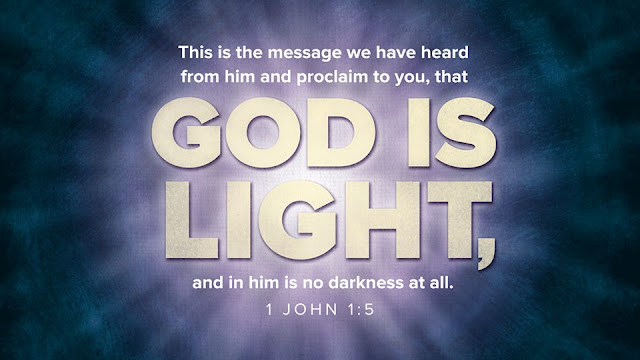 As dark as this world seems to be getting, in HIM there is NO DARKNESS at all. None. It is time to let our lights shine before men, shine into the darkness of this world as we abide in HIM.

To God be the Glory!

Email ThisBlogThis!Share to TwitterShare to FacebookShare to Pinterest
Labels: Hope, JOY, Light, Word for 2014, Word of the Year

"In him was life and the life was the light of men." John 1:4 KJV. It's going to be a great year as we proclaim the life He has given us.

Good word. I also pray each year for a personal focus, a phrase. This year, also with me it was everywhere I looked, is the year to move forward...I'm ready.

Have I got a story for you! *Smiles*

Thanks for sharing beautiful thoughts here. My novel Vapors is what I call my Hope series. I love that there is always hope in light in the dark world we live in. Jesus reigns for us all in 2014!

Much love in Christ,
Paulette Harris

Great word for us, Tracy. May we all reflect His Light in 2014. I had not read this when I wrote you about light shining in the darkness this past weekend. I love the way God confirmed this word! Ann