We interrupt this program for a special alert ... We realize that readers are poised for another Christmas memory article from one of our outstanding authors. They will resume tomorrow, although any comments left today will also go toward entry for our contest! So leave some love!

Today is the release day of

Cynthia Toney's first two books of the Bird Face series have earned high praise such as:

… most emotionally moving … it's never easy to see someone you love lose their grip on life. Cynthia Toney does a lovely job handling this difficult topic [in 10 Steps to Girlfriend Status].”
~A.J. Cattapan, author of Angelhood and Seven Riddles to Nowhere

Book Three follows right along with the first two, giving insight into a teens life with both poignancy and humor.

Here is the Amazon link. 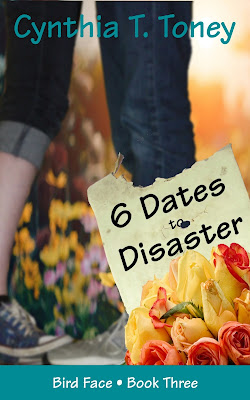 People will hide just about anything inside a jewelry box—especially a secret.
As a kid, I tried saving a hard-boiled Easter egg in mine. But during a warm Louisiana spring, it doesn’t take long for that secret to get out.
Two hours on a Saturday afternoon at the biggest flea market in the parish, and I hadn’t found a single jewelry box.
My stepsister, Alice, and I hoofed from table to table, covering territory as quickly as possible. Wearing shorts … in February.
If it hadn’t been for the merchants’ canopies, we would’ve sunburned. A little more air between my body and the one standing next to me would’ve been nice, but the place was too crowded with shoppers.
“How adorable!” A lady at the next booth squealed over a wooden Easter bunny yard ornament that could be personalized with her child’s name.
I crossed my eyes. Even as a six-year-old, I wouldn’t have wanted anything in front of my house to read “Wendy.”
Enough distractions. Back to the day’s goal. Finding a jewelry box for Mom among thousands of items scattered across a hundred folding tables might be harder than I thought.
“There’s too much junk in this flea market.” I rolled my shoulders and sighed.
The booth owner stared daggers at me.
“Haven’t you spent enough time looking? Why don’t you just buy her a new one?” Alice flicked perspiration from above her lip with a fingertip. Her strawberry-blonde hair had begun to frizz, and she lifted it off her neck, fanning it behind her.
I shook my head, ponytail slapping my jaw. “Anyone can go to a store and do that. It’ll mean more to Mom if the jewelry box has history—or at least some character. I know the right one is here somewhere.”
Alice shrugged. “You should know. She’s been your mom longer than she’s been mine.” She picked up a dingy-white crocheted vest and held it against her front.
Mom and Papa D—short for Daniel—had been married almost six months. In the four months between the end of eighth grade and my first semester at LeMoyne High School, Alice had gone from being a classmate I hardly knew to being both my running buddy and my sister. We suffered through our share of quarrels, but living with each other had become easier since Christmas. And it was nice having a sister to go with me on errands. If only she would focus.
Alice sniffed the vest under the armholes. She slid her hands through the openings and shrugged the vest onto her shoulders.
My gaze traveled two booths down toward a collection of antique-looking tabletop accessories. “I’ll be over there.” I pointed.
“I’m coming.” Alice slipped out of the garment and followed me.
Rusted and tarnished items cluttered the table. A pair of wrought-iron candlesticks towered above the rest of the display.
I gasped. Beneath the candlesticks sat a large mahogany box almost the same color as our hair—Mom’s and mine.
Hands shaking, I moved the candlesticks aside and lifted the box. It contained three drawers with brass pulls. The sides and hinged top showed only a few scratches. I set the box back down and opened one of the drawers.
“See?” I whispered as though in the presence of a holy relic. “This is what I’m talking about.” I glanced at Alice to make sure she was paying attention. “Made of solid wood with red velvet inside. You can even see impressions in the velvet where bangle bracelets were stored. This is all real.”
Alice rolled her blue eyes but grinned.
“It’s the right size, too—much bigger than her old one. It should hold all her jewelry and Grand-mère Robichaud’s antique pieces. She won’t need those cardboard boxes anymore. She’ll love it.”
“Then let’s get it.” Alice reached inside her pocket for some money, which she’d never lacked since I’d known her. As part of the Rend family, Mom and I were still getting used to having extra money for luxury items.
Alice and I split the cost fifty-fifty, and I bagged the box. I’d never spent that much on a gift before, but Mom was worth it.
Alice phoned Papa D that we’d meet him and my little stepbrother, Adam, at the car. They’d found gifts for Mom, too.
This was going to be her best birthday ever.

The first book in Cynthia's Bird Face series, 8 NOTES TO A NOBODY, is part of our 12 Books of Christmas contest. Leave a comment below with your email address (US residents only). Your email address will also be added to our monthly newsletter list. (Unsubscribe anytime.) While you're commenting, share your favorite book from your high school years.
at 4:00:00 AM

Thank you, Crestway Office! It seems like a dream right now. Three books of the series published already! One more to go.

A great first chapter by a great author! Way to go, Cynthia!

I am grateful for your cheers, Jean!