The final installment of Fay Lamb's Amazing Grace Series is available in E-book at a 40% discount for only a few more days. Until September 4th, you can order FROZEN NOTES for only $2.99! Don't miss out on this outstanding book and be some of the first to read it! 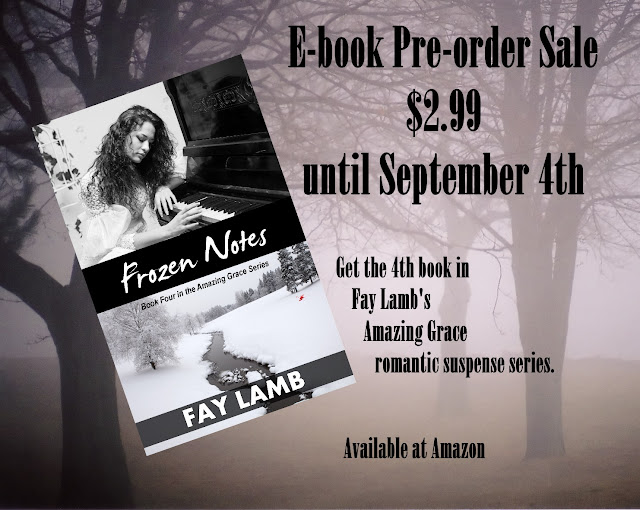 Lyric Carter’s dreams of fame and fortune in a rock band ended the day Balaam Carter left to pursue their dreams without her. When Balaam’s brother promised to love and protect Lyric and to love her son, Cade—his brother, Balaam’s child—as his own, she believed him. But Braedon turned her dreams into a nightmare by killing Balaam’s best friend, turning the gun on himself, and placing Lyric in the middle of a criminal investigation that could leave her and Cade dead.

Balaam Carter’s every dream has come true, but he’s living in a nightmare of addiction and regret. The famous rock star would give everything he has to return to the girl he once held in his arms—back when his only crime was running moonshine for his father. Now, he’s seeking redemption for all the destruction his dreams have brought to the people he loves.

No one said the road to recovery would be easy, but Balaam is also desperate to protect Lyric and the little boy he left behind from a state full of drug lords who believe Lyric has the evidence that will tumble their lucrative cartels. Balaam’s continued sobriety, his natural ability for finding his way out of trouble, and his prayers to God above for the strength to never let them down again are all that he has to protect Lyric and his son. And still, he doesn’t know if he’s up for the task.
at 3:52:00 PM

Sounds like a great book. Thank you for sharing about it.

This book looks great, thank you :)

Sounds like a rather complicated plot, but relevant to today's culture. Interesting! ;-}

I really enjoy Fay's books, and the general plot of Frozen Notes, but a pet peeve of mine can be the names of the lead characters. I'm ambivalent about Lyric- fun but maybe too cutsie. Too picky of me! The theme of the need for continued sobriety and the work it takes is a very important one. Not only concerning substances, either. From eating disorders, from being verbally abusive... A ministry I was involved in used the book is Life's Healing Choices. That along with the whole Serenity Prayer. Am glad for this part of the Amazing Grace series.