I had the privilege of living with my maternal grandparents for about a year after I finished my first year of college. I moved from the tiny Alabama town where I'd spent the past year to my grandparents house in metro Atlanta.

Grandad Ern was a railroad man and was still working for Southern when I moved in. (He retired a few years later with 39 years + 1 day of service.) His schedule coincided with my own work schedule frequently - I worked 2nd shift so I could go to school during the day - so we spent our "wind down" time in the kitchen.

One of his favorite late-night snacks was flapjacks, and even though I follow the recipe, I never can quite get them as good as his! I think his company made a difference. 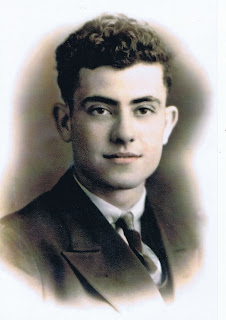 Grandad Ern's Flapjacks
Add water to self-rising flour until almost runny. Drop into a hot frying pan with a 1/4" of hot grease. Fry on each side until done. Careful not to cook too fast as the center will not get done. Split open and spread liberally with margarine/butter and jelly. (He preferred grape jelly - I preferred strawberry preserves.)
at 9:57:00 AM