Today, WIP founder Tracy Ruckman shares a recipe with us.

My paternal grandmother, Nanny, made the best divinity in the world. When I became an adult, I tried to make it every year. Some years I was successful, other years I was not. Just before Nanny went to Heaven, she told me the secret - it all had to do with the humidity. (I guess you see the importance of family recipes here, can't you?) If the humidity was too high, the divinity wouldn't set properly; if it was too low, the candy would be dry.

For several years, I followed this guideline - 57% humidity seemed to be perfect for candy-making. (In the South, those percentages don't get that low very often.)

Then my husband Tim entered the picture with his mother's divinity recipe. The ingredients were almost identical, but the cooking methods were different - and Edie's recipe did not rely on the weather. Since Edie's recipe is top secret, and since it's Grandparent Recipes month, we're calling this Nanny's recipe, but we'll give Edie's tips for cooking it below. It helps to have two or more people making this together and/or a stand mixer. 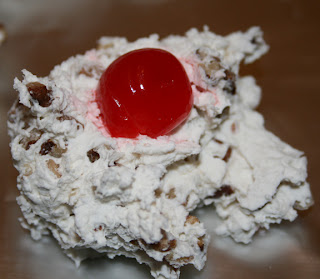 Mix sugar, water, syrup together in large saucepan. Bring to boil, then boil until the liquid "spins a thread," stirring constantly. While the mixture is boiling, separate eggs and put the whites in a large mixing bowl. When the sugar mixture spins a thread, pour half of boiling liquid into the egg whites, beating with mixer as you pour. The mixture will begin to expand. Put the remaining liquid back on the stove and bring it back to a rolling boil. Then pour all of it into the expanding egg white mixture while continuing to beat.

Beat until the mixture a minute more, then use a large spoon to stir the mixture several times, until it gets a dull finish. Then, add nuts or chopped cherries if you wish, then very quickly, drop by rounded teaspoons on large sheets of waxed paper, then top with cherry halves or pecan halves, as you wish. Let cool. Store in air tight containers.

Divinity makes great gifts, and it's easy enough to mix and match different kinds. Some batches we leave out all nuts and cherries, topping only with one or the other. Some batches are deluxe, and have a little of all of it. The fun part is that each kind tastes very different. Even though you make a large batch, it will disappear very quickly - at least it does in our family.
at 1:19:00 PM