Magnificent Hope made her way to Colorado after leaving Amelia Island, and rode with Dianne E. Butts on her motorcycle on the Christian Motorcyclists Association’s annual “Run for the Son.”


Christian Motorcyclists Association (CMA) is an interdenominational motorcycle ministry aimed at telling motorcycle enthusiasts and others along the highways and byways about hope and salvation in Jesus Christ. 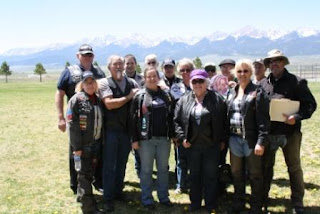 Every year on the first Saturday in May, the Christian Motorcyclists Association (CMA) has its one and only fundraiser for the year. In the biker world, a ride is called a “run,” and the “Run for the Son” raises money for Christian missions.

Last year in 2011, Run for the Son raised over $3.7 million. The money is divided between four Christian evangelism organizations: 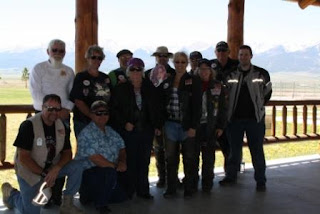 For Run for the Son, bikers ask friends to sponsor them for a 100 mile ride. On Saturday Magnificent Hope rode with Dianne to Westcliffe, Colorado, and met many of Dianne’s biker friends and members of Dianne’s chapter, El Shaddai Warriors.

Those are the Sangre de Cristo Mountains in the background. Hope knows a little Spanish, so she knows that in Spanish “sangre de Cristo” means the “blood of Christ.” Dianne’s friend explained that in the light of the morning sunrise, often the mountains appear red, reminding us of the blood Jesus Christ shed to pay for our sins, which is the magnificent hope we have in Christ.

Hope thought the view of the Sangres from Westcliffe was an absolutely magnificent sight!  The locals can tell you the names of all those “fourteeners” (mountain peaks that reach above 14,000 feet elevation above sea level). (Dianne was sorry they didn’t get her motorcycle in the photo!)

Together, Dianne and Hope raised $140.75 for Run for the Son (but Dianne gets the t-shirt). According to the mission organizations that get the money, for every $3 raised, one person comes to salvation in Jesus Christ.

[ED. NOTE: That's almost 47 people, in case you wondered! What a worthy cause - Dianne, thanks so much for sharing it with us. I wanna bike!!]

Be sure to check back Friday for the first installment of  "Where in the World is Magnificent Hope?" - and your first opportunity to enter our Magnificent Hope contest for your chance to win!

The Beginning of Hope Tour 2012 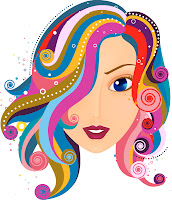 Saturday was such a beautiful day to ride in Colorado. (The next day we got rain and snow! That's springtime in Colorado.)

Hope was such a good passenger on the back of my motorcycle. I hardly knew she was back there!