Welcome to Our Newest Release! 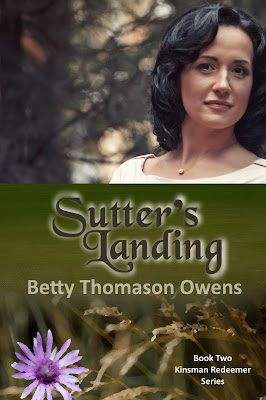 We're so excited to share about Betty Thomason Owen's second book of her Kinsman Redeemer series! SUTTER'S LANDING is a visit to a simpler, more gentle time where neighbors went out of their way to help you, and love expanded like the blossoms of a rose.

Still reeling from tragic losses, Connie and Annabelle Cross face life with their signature humor and grace, until fresh hope arrives on their doorstep.

In early spring of 1955, Annabelle Cross and her daughter-in-law, Connie have nearly made it through the first winter on their own. Then the skies open up as West Tennessee and much of the south endures one of the worst floods in history. As many of their neighbors endure losses due to the flooding, Annabelle and Connie sit tight on dry ground.

As spring gives way to summer, Annabelle begins to dread Connie’s upcoming marriage and removal to Sutter’s Landing. Though she’s happy to note the growing affection between Alton Wade and her daughter-in-law, their marriage means Annabelle will be on her own for the first time in her life.

Connie’s doubts increase when Alton’s bigoted brother Jensen uses every opportunity to drive a wedge between them. Is she doing the right thing? Did she move too quickly? Unexpected summer visitors and anticipation of a new neighbor provide diversion and open possibilities for both Annabelle and Connie.

Connie Cross sat straight up in bed. What was that sound? Slowly, her vision adjusted to the semidarkness of her room. Outside, but close—too close. A gunshot? She slipped out of bed, donned her robe and tiptoed through the next room where her mother-in-law Annabelle lay. A soft snore told her the woman still slept.

Quiet as possible, Connie opened the back door and stood looking through the screen. Chilled air curled around her ankles and sent a shiver up her spine. She pushed the screen door open. Outside, on the small back porch, she stood for a moment to get her bearings. A thick, white fog enveloped the surrounding area. She wrapped her arms around herself for warmth and peered into the mist.

One of the hens broke into a loud cackle, which wasn’t unusual, though a bit early in the morning for such a racket. Connie was just about to retreat to the warmth of her bed when she caught movement out of the corner of her eye. She squinted in that direction, listening. Was someone approaching the house? An odd noise, like an animal snuffling, was the only sound. Her scalp prickled. She trembled, though not because of the cold. The sound moved closer.

Gradually, a shape emerged, advancing through the mist. Before she could make out what it was, there came a sharp whistle. Her back straightened as her nerves uncoiled. She recognized that whistle. The thing halted. Connie stepped forward. “Samson, is that you?”

The dog whined, and gave a soft yip. He trotted closer, nose to the ground, tail at attention.

A smile warming her insides, Connie peered into the mist. “Alton?” Their nearest neighbor, Alton Wade, was also her fiancé, though they hadn’t publicly announced it yet. A moment later, she made out his lanky frame, moving toward her.

Alton stopped below the porch, too far away for her to make out the face beneath the brim of his hat. Dressed in a loose jacket, he held a disjointed shotgun in the crook of his arm. “Did I wake you?” His voice was low, as though he was not yet fully awake.

Keenly aware of her state of undress, Connie kept both arms crossed over the front of her blue chenille robe as she crept closer to the edge of the porch. “You did. Was that a shot I heard?”

“Yes, it was. A fox was about to have herself a morning snack on Miss Annabelle’s chickens.”

Connie caught her breath. “Did you kill it?”

Connie could hear the prideful grin on his face. She gave him an answering one. “Of course, you did.”

Behind her, the screen door inched open and Momma spoke. “Killed what?”

Connie turned to look at her. “Alton killed a fox about to get your chickens.”

“Land sakes. Well, thank you kindly, son. Will you come in and warm yourself?”

He gave a low chuckle as he shifted his stance. “No, thank you, Miss Annabelle. I’ve got to get back home and see to my animals. I’ll take that vixen’s carcass with me, if you don’t mind.”

She giggled. “Not in the least. You take it with my blessing.”

Alton hesitated another moment, while his gaze burned into Connie’s. He lifted one hand to tug the brim of his hat. “Good morning, ladies. I’ll be back around later on.”

“Good morning,” Connie whispered. I love you, her heart sang, as a thrill chased up her spine.

Momma held the door for her. “You best get in here before you catch your death.”

Death. As she turned toward the door, Connie glanced over her shoulder to the place where Alton had disappeared into the mist. By now, he’d be back at the chicken coop, gathering his prey. Would death steal him away from her, too? She sucked in a jagged breath as the screen door eased shut behind her. She sincerely hoped not. But thoughts like these were a daily struggle. When did one overcome such a fear?

It was less than a year since she and Momma had been widowed. Ray Cross and both his sons had drowned in a boating accident. Three lives snuffed out in a moment’s time. She rubbed her arms against another tremor that shook to the very core of her being. Forcing those thoughts aside, she moved purposefully toward her bedroom, to make the bed and get dressed before little Joseph David awoke. She hoped he’d sleep for another hour or so, since he’d been awake so much last night.

As she straightened the bedclothes, Momma shuffled in from the kitchen. “I’ve gotta get a peek at my grandbaby.” She bent over the cradle for a moment. “Good morning, precious.” Before leaving, she pressed a kiss against Connie’s cheek. “Coffee’s on.”

Connie hoped she’d brewed it good and strong. Perhaps the grayness of the morning had set her on edge, she wasn’t sure, but she’d need to pull herself up and out of this melancholy soon. She glanced at the snoozing baby and breathed a soft prayer.

She and Alton had sat together at church for the first time this past Sunday. Up until that time, they’d been discreetly separated by his mother and Momma. The rumor mill that had been a mere trickle, let loose like a flood. The looks cast her way after the service told her she was not a popular choice for this eligible bachelor.

Alton’s older brother Jensen’s gaze was the most brutal of all. She could easily understand why he was such a success as a lawyer. His wife, who had never said two words to Connie, looked down her regal nose before turning her back, feigning an interest in the altar bouquet.

Connie blew out a breath in an effort to cleanse her mind of the troubling memories. The only expression she should be remembering was the one on Alton’s face. She smiled at that thought. His eyes had taken possession of hers, searched the depths, and left her weak in the knees. In church. She’d scurried down the aisle to join Momma who’d been busy showing off her precious bundle. Joseph David was the delight of the senior ladies’ Sunday School class these days.

Momma was certainly humming a happy tune when Connie entered the kitchen a few minutes later. The sweet, spicy smell of cinnamon rolls filled the air. Connie breathed it in. “Oh, my, what’s the occasion?” Momma usually saved cinnamon rolls for Christmas morning, or once in a while on Easter Sunday.

“Does it have to be an occasion?” She cast a grin over her shoulder as she drew out a pan of the fragrant pastries. “I just had a craving for cinnamon, and this is what came of it.”

“I’m not complaining,” Connie assured her. She crossed to the dish shelf, grabbed a cup and poured herself some coffee. While Momma iced the rolls, Connie stirred the eggs. Their hens weren’t laying yet, so Mrs. Byrd, their neighbor across the road, kept them well supplied in return for a bit of help. Connie had learned to gather the eggs, clean out the chicken coop, milk the cows, and feed the horses. She enjoyed most of it, and Momma didn’t mind watching the baby. It was a lot easier than picking cotton. She hoped her cotton-picking days were over.

Momma set a heaping plate of rolls in the middle of the table. “I expect to see Riley one of these mornings. He did promise to plow my garden.”

Connie ladled a serving of scrambled eggs onto their plates. She set the skillet back on the stove. “Maybe he expects Alton to do it.”

“Now why would he expect that? Y’all haven’t announced anything.” She settled into her chair and waited for Connie to join her.

“I imagine by now, it’s probably all over town.”

Momma giggled. “Only that he’s interested. Interest doesn’t obligate a man to take care of a widow’s chores. Riley’s one of my oldest friends. Besides, he promised.”

Joseph David decided now might be a good time to wake. He let out a squall just as someone knocked on the front door.

Momma frowned as she pushed away from the table. “You get the baby, I’ll get the door.”

Curiosity drove Connie to peek out the window on the way to the bedroom. Why had she done that? A black sedan with an emblem on the door sat in the drive. A man in a dark suit stood on the porch. Not again. Please, God, not again.