UPDATE: Unlikely Merger is NOW available! We will offer
the book FREE on Kindle July 1-July 5, 2015!

We decided to take a "virtual vacation" around here, since a real one seems impossible with our crazy schedules. We invited our authors to share their fun with us. This week, and part of next, we're sharing some of their favorite road trips. Have you ever taken a road trip? Share one with us in the comments, and you could win a prize!

Today, we welcome one of our newest authors, Deborah Dee Harper. We're publishing her delightful Road's End Series - Book One will be released later this year, so stay tuned!

During the summer of 2008, we (my daughter Darice, her husband Ron, and I) transitioned from Columbus Air Force Base in Mississippi to Elmendorf Air Force Base in Anchorage, Alaska. While the military moved us, we still had a lot to carry ourselves. It could take weeks for our belongings to arrive as nothing arrives quickly in Alaska, except maybe winter. In addition to what we carried, though, we had three cats, a dog, and a rabbit, along with their food, litter box, medicines, toys, and bedding. It took a lot of planning, but we managed to wedge ourselves and our furry ones into the Ford Explorer and headed out.

There’s no short way to get to Alaska from anywhere in the world, with the possible exception of parts of Russia. Because we had to get our second car up there (the first was shipped), we had to drive. That meant a 4,216.5-mile trip (but who’s counting?) with five animals in various stages of car sickness, terror, or digestive upset, and three adults wedged in like pieces of a puzzle. This lasted until we reached Denver. There my daughter decided to fly with the rabbit for the remainder of the trip (at this point we knew the rabbit would never survive the journey) to stay with a friend until Ron and I and the rest of the fur-bearers arrived.

Once we reached Dawson’s Creek, we began our journey on the famed ALCAN (Alaska-Canada) Highway. The ALCAN was built during World War II and eventually connected Alaska to the rest of the United States through Canada. At one time it ran about 1,700 miles in length, but by straightening the road at several points during the last sixty years of continual road construction (yes, it isn’t found only in the U.S.), it is now a mere 1,387 miles long. I hear it’s now paved completely, but when we traveled it, we ran across several long patches of gravel highway with nothing to see but majestic mountains, glaciers, crystalline lakes, moose, eagles, and forests comprised of what must be billions of spruce trees. Because we couldn’t travel quickly on the gravel, we were forced to drive at a snail’s pace and do nothing but revel in God’s creation.

Efficient? No. Inconvenient? A bit. Glorious? Without a doubt.

Although accommodations along the ALCAN Highway were, at that time, always somewhat... shall we say, shabby?, we survived. Of course, we had to sneak in our animals most nights since they didn’t always allow pets in the rooms. Ironically, we wouldn’t let our animals sleep in those conditions any other time, but since we were, we had no choice. Our only real complaint, though, was that the cell phone signal ranged from abysmal to non-existent. We tried to call my daughter at each stop, but to no avail. We had no idea what that would mean by the end of the trip.

We finally arrived in Beaver Creek, our last stop on the journey, having crossed over into the famed Yukon Territory earlier. Although we’d made reservations, something went awry, and we found ourselves with no place to sleep. We decided to try the last place on earth we wanted to spend the night—a cobbled-together conglomeration of 1940s construction trailers converted into motel rooms. It was either that or take our chances alongside the highway with who-knows-who (or what) roaming around in the dark. Besides, we had the three cats and a dog to consider. There was one room (and I say “room” with a shudder) left. We took it. It was sub-par by slum standards, but we had no choice.

That night after we turned out the light and said good night to one another and the dark Canadian night settled around us, I heard Ron, with his back to me in the other bed say, “You know we’re going to die, don’t you?”

We awoke (surprised as all get-out) the following morning, packed up our brood of (by then) very angry animals and headed for the Canadian-Alaskan border. Once there, we pulled up to the guard, a Royal Canadian Mountie, and gave him our identification. He looked at us, and said, “Ackerson?” Ron nodded. “You know we’ve been looking for you, right?”

“Who do you mean by ‘us’?” Ron said. “And why would anyone be looking for us?” Immediately, flashes of our sneaking contraband animals in our rooms each night passed through my mind. I imagined years of imprisonment. If their motel rooms were that bad, what would jail cells look like?

“Us,” the man said, pointing to his uniform. “The Royal Canadian Mounted Police. Your wife says you haven’t called her in four days. She called us and we’ve been searching for you since then.”

It goes without saying our reunion in Anchorage wasn’t as warm and friendly as I’d hoped. Four days of thinking your husband, mother, and four pets were lying in ditches along the highway, dead and probably being eaten by wolves and other assorted wildlife, makes a person cranky when they run across said people and pets alive and well.

Eventually, Darice spoke to us again and we can talk about it, seven years later, with only one or two small arguments erupting. Take my advice: if you travel the ALCAN Highway, with or without animals, time it so you don’t have to stay at Beaver Creek’s version of the Stanley Hotel, and for crying out loud, buy a satellite phone. 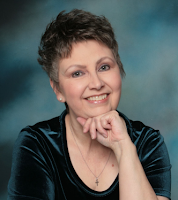 Deborah Dee Harper now writes from Murfreesboro, Tennessee, where she lives with her daughter (who is now speaking to her), her glad-to-be-alive son-in-law, Ron, and their adorable daughter, three-year-old Molly. Just one of the five animals who took the trip to Alaska with her is still alive, but we’re pretty sure their eventual deaths had nothing to do with the trip to Alaska.

Her Road’s End series will be published soon by Write Integrity Press, and her children’s adventure series, Laramie on the Lam, which includes the story of a trip along the ALCAN Highway, is slated for re-release in four separate books. It’s available now in print compilation of all six installments. 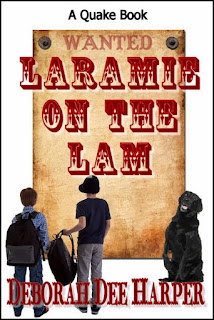 Did someone say PRIZES? Yes, for the next two months, we're going to be giving away a variety of books and other goodies.

Today's question is:  Have you ever taken a road trip? Share one with us in the comments, and you could win a prize!

Deborah Dee is providing one of the giveaways - a copy of her book Laramie on the Lam.


More for the Journey: