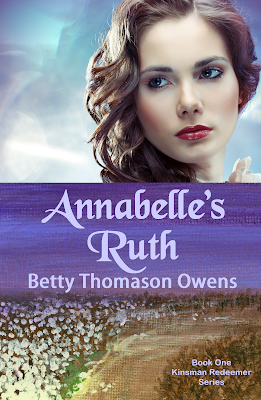 This has been a busy month for us here at WIP, and for many of our authors. Today's guest blogger is Betty Thomason Owens, and she's been one of the busiest! Her latest novel, Annabelle's Ruth, released last week, she's one of the authors of Unlikely Merger, and she's a Contributing Editor to Imaginate Magazine, which premiered earlier this month. Yet somehow, she manages to keep the sweetest disposition, and offers many of us encouragement and a laugh or two every single day.

A couple of years ago, I flew to Seattle to accompany my daughter-in-law and her mini schnauzer as she drove East to join my son in Kentucky. We planned to take our time, and see a few sights along the way. So instead of heading due east, we headed west from Seattle to Portland, Oregon to visit her sister, who lives in the beautiful Willamette Valley. Then we continued west until we reached the Pacific Ocean.

From there, we headed south on the 101. Of course, we had to stop to “ooo” and “ahh” along the way, so our progress was slow. Every bend in the road revealed breathtaking vistas. Oregon’s west coast is rugged and beautiful. We spent our first night at a quiet little inn on a bay, a place I could easily have stayed a few days just to chill.

Northern California: Eureka! I thought of the SyFy channel’s quirky series by the same name. Happily, nothing untoward happened to us as we passed through.

Tall, tall trees. We had to stop and get out, because you can’t see the tops of those trees from inside your car. Gus, the mini schnauzer did what dogs do. He marked the first ancient redwood he could find. We also paid a quick visit to Paul Bunyan, who stood tall next to Blue at his own roadside museum.

The Golden Gate Bridge loomed ahead. We spent an hour or so traipsing Golden Gate Park, ate a delicious bowl of veggie chili and watched the colorful sails of the contestants in the World Cup. Yes, we had happened upon a world-class sailing event, something I’d never expected to see. 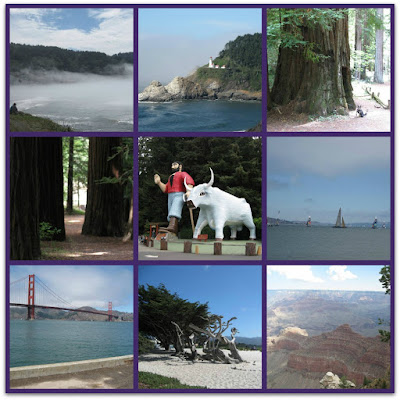 Before heading to the valley, we made a mistake, really our only one on this long, fun journey. We decided to check out the “1.” Highway 1 hugs the Pacific coastline and on the map, looks really interesting. But in person—twists and turns will slow you way down and make you seriously carsick. Both of us suffered. I survived by drinking strong ginger ale, so I took over driving for a while. The scenery was amazing, but I was happy to get back to the 101.

After a cozy night at a Tuscan-style motel in the Napa Valley, we left California by way of America’s salad bowl (desert gardens) and headed for the last site on our must-see list—the Grand Canyon.
It’s been said before. Cameras just can’t do it justice. I’ll never forget the rugged beauty of the Grand Canyon. I’ve flown over beautiful mountains and prairies, traversed deserts, gazed at blue water, but this big gully kept my attention for a good while. The vivid colors that change with the sun’s light, the flora and fauna—we were spellbound. Gus just wanted to eat the chipmunks.

After the canyon, we gawked at many beautiful sights along the road home. The ghost towns along Route 66, the night view of Albuquerque, New Mexico, the unimpressive Rio Grande, the rail yards of Amarillo, Texas. It was an unforgettable trip in so many ways.

Each time we exited our vehicle, we came into contact with folks. That’s what I called the natives. We met a lot of (mostly) friendly people along the way. I was only freaked out once (in California) when I walked into a women’s restroom at a McDonald’s and there were two homeless men in there. I have nothing more to say about that.

The entire experience, which included flying by myself for the first time ever, pulled me out of my comfort zone, and stretched me in many ways. It’s one of my fondest memories so far. Because of that trip, I can appreciate what Mercy Lacewell, heroine of Unlikely Merger, went through. It takes real fortitude to leave your home and head into the unknown.

Betty Thomason Owens writes romantic comedy, historical fiction, and fantasy-adventure. She has contributed hundreds of articles and interviews to various blogs around the Internet and is an active member of American Christian Fiction Writers (ACFW), where she leads a critique group. She’s also a mentor, assisting other writers. She is a co-founder of a blog dedicated to inspiring writers, and a contributing editor for the online magazine Imaginate.

Her 20’s era romance, Amelia's Legacy, Book One of the Legacy Series, released October, 2014 (Write Integrity Press). She also writes contemporary stories as a co-author of A Dozen Apologies and its sequels, The Love Boat Bachelor and Unlikely Merger (July 1). She has two fantasy-adventure novels, The Lady of the Haven and A Gathering of Eagles, in a second edition published by Sign of the Whale BooksTM, an imprint of Olivia Kimbrell PressTM.

Her latest book, a 1950’s historical novel inspired by the Book of Ruth, Annabelle’s Ruth, Book One of the Kinsman Redeemer Series (Write Integrity Press) released this month.

More for the Journey:

Jennifer Hallmark: Traveling with Others by Phee Paradise
Fay Lamb: Who Wrote Whom: Meet the Authors of Unlikely Merger: Marji Laine

Write Integrity Press: Let the Road Trips Begin
Deborah Dee Harper: The Only Thing We Have to Fear ... Getting it All Wrong