That's When the Crazy Started ...

I was in my early 20’s, fresh out of college and ready to start a new life. I was at a crossroads because I was new in my relationship with Christ but clueless how to live in a way that was pleasing to Him when I was still hung up on what others thought of me.

I was also new in my first real job, matching senior citizens with not-for-profit agencies. It was a position that gave me the opportunity to network with the community. My friend wanted to help me along, so she invited me to join the local service club in town. Although I felt young, awkward and lost amidst a sea of older men, I decided to participate with her.

That summer the club was having a big meeting at the local hotel. It was a big deal and the members were expected to be there. Enough time has passed that I don’t remember what the agenda was, but I do recall being bored.

Bored and me never have a happy ending.

The leaders called for a break so I decided to explore the other conference rooms in the hotel. Another woman joined me and together we headed for the hallway where the walls seemed to shake from the rockin’ music.

“I think it’s a wedding reception.” I gestured for her to follow me as I decided to walk by.

And that’s when the crazy started.

A man from inside the party, where alcohol was definitely flowing freely, pointed to me and waved me in. I shook my head, panicked that I would be the pioneer wedding crasher long before Hollywood decided to make a movie about it. The guy wouldn’t take no for an answer and went into the hallway. He begged me to join him, taking me by the arm, and leading me inside.

Part of me was excited, it was the kind of unpredictable fun college had been. Yet, as a new Christian, the place was full of choices that were going to lead me down a path I didn’t want to go down anymore. Most of all, trespassing.

He grinned, his glassy eyes full of spunk. “Don’t worry. I’ll vouch for you.”

I tried to back out. “I have a meeting. I really can’t be here.”

I looked around trying to find who this “Bob” was.

The stranger continued. “He’s my best friend from college, the groom.” Then he dropped Bob’s last name. A name I knew.

I jerked my hand away and headed for the door. “That’s my dentist. I can’t be here.” I thought about when my next appointment was. Of all the times to have an appointment, it was Monday. I had a hard enough time facing the guy. He was young and resembled Top Gun Tom Cruise. Something my mom didn’t miss when she sent his news article to my college mailbox.

“You know him? You have to dance with him. Let’s go.” Oh this guy wasn’t giving up.

By then I was in an all-out panic. I back-pedaled out of there so fast that the college friend couldn’t keep up. I high-tailed it back to the stuffy meeting prepared to sit straight and pay attention for the rest of the day. And I breathed a prayer that Dr. Bob would never, ever know I crashed his wedding.

Monday came and I felt confident I was in the clear. I wasn’t sure why the guy was cleaning my teeth instead of being on a honeymoon but I wasn’t going to ask. He asked how I was and I gave the most uninterested tone I could muster.

He continued getting the tools ready, fixing the seat, turning the headlamp thing on. “Anything interesting happen this summer?”

I opened my mouth and he inserted the plaque-scraper-thingy. Even if I wanted to talk, I couldn’t, so I shook my head. Nope. Not one thing. Especially not Saturday at the hotel where his reception was.

“So, Julie. How did you like my wedding reception?”

Thankfully, he laughed and asked why I didn’t dance with him and made sure his friend in his state treated me right. But I could never look Dr. Bob in the eye again.

That was a crazy summer. 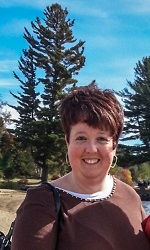 Julie Arduini’s passion is to encourage readers to find freedom through surrender. She knows it has to start with her so she admits she’s surrendering “the good, the bad, and---maybe one day---the chocolate.”
She desires in her fiction to not only bring hope to those struggling with surrender issues, she wants to highlight the various Upstate New York settings she enjoyed for over three decades. Entrusted,Entangled, and Engaged pay homage to the beautiful Adirondack Mountains.
Julie is also one of the authors in the sequel to A Dozen Apologies,The Love Boat Bachelor.
She holds a BA in Communications from the State University of New York at Geneseo and is a graduate of the Christian Writers Guild. She’s a member of American Christian Fiction Writers and the 2011 winner of the JournEzine Christmas Contest. Every other Wednesday she blogs at the popular site Christians Read. She enjoys reviewing books and encouraging others at juliearduini.com.
When she’s not writing, reading or blogging she enjoys taking amateur nature pictures and nurturing youth. With a heart to encourage others, she enjoys interacting with readers through social media and can be found throughout social media @JulieArduini.
She resides in NE Ohio with her husband and two children and is blessed to be a step-mom to two adult children and son-in-law who reside in Wisconsin. All of them know not to mess with her chocolate stash.


Fay Lamb: Who Wrote Whom: Meet the Authors of Unlikely Merger: Carole Towriss


Fay Lamb: Who Wrote Whom: Meet the Authors of Unlikely Merger: Julie Arduini


Jennifer Hallmark: Traveling with Others by Phee Paradise

Julie, what a hilarious summer YOU had! Way to go for trying to live out your newfound Christian life (and not jump into crashing wedding receptions before it was cool :-)Great read!

Thanks, Deb! That memory is as fresh as the day it happened! It was fun to share it.