The Road Trip of the Century

Today, we welcome one of our new authors to the blog. Raelee Carpenter was one of our chapter contest winners and created one of the heroes in Unlikely Merger. She also has a nonfiction article in Imaginate Magazine this quarter. 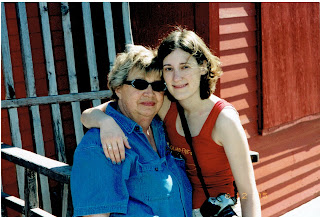 My hands white-knuckle the wheel as the road curves wildly. I ride the mini-van’s brakes as it speeds down another 7% grade decline.

The on-going commentary from the passenger seat is not helping me maintain my composure.

“Watch for falling rock!” My grandmother shouts out her amped-up, extra-scary version of the road sign we just passed.

I think she needs a Xanax.

“It’s ‘fallen rock.’” I say. “It doesn’t mean something’s going to drop right on you, but that you might have to curve around something that already fell.”

“You don’t know when it could fall,” she replies.

I glance in the rearview at my mom and beg silently for help. Her head at an awkward tilt, she peers out her window and up the side of the mountain.

I like to drive. I honestly enjoy it. When I took the wheel from mom after our hearty Italian lunch in , I wasn’t expecting the crazy roads, tight lanes sandwiched between barely-in-control eighteen wheelers, the freeway-side dirt ramps for runaway vehicles, or the creepy road signs and the creepier commentary...

I certainly wasn’t counting on the number of times I’d wonder if I was about to see my pasta again—in a half-digested configuration.

“Yes, you do. Please stop saying those things. I’m trying to concentrate on not killing us.”

Mom says nothing. Grama huffs and resorts to reading the signs in a mumble. I grind my teeth over 200 miles westward on I-90 until shortly after the border.

At long last a yellow sign beside the road declares “Chain Down Zone.”

I laugh. Hysterically. Soon Mom and Grama chuckles join mine, until we’re all laughing so hard we can’t breathe.

I say, between gasps for air, “Seriously, how many times in the last four hours did you think we were going to die?”

When the laughter dies down, I read a road sign. We’ll be in soon; that might be a good place to stop for gas. “Can you take over soon, Mom? I need to relax for awhile.”

We enter the city, bypassing high over Lake Coeur d’Alene. In the late afternoon June sun, it’s breath-taking. Billions of fiery diamonds on a field of glassy rippled azure.

Tomorrow morning we’ll reach , a couple days after that, we’ll cross the border into . We’ll celebrate Father’s Day with my great aunt, her husband, and all their kids and grandkids. I’ll see Solvang, , and . A couple weeks from now, I’ll even lose my transmission somewhere in . But this—right here—is a moment I’ll never forget.

Raelee May Carpenter is a Christian and an author of work that is passionate, descriptive and just a little edgy. Her literary romantic suspense novel Liberation Song (eLectio Publishing) released in May 2015. She also self-published a contemporary teen novel The Lincoln High Project and an allegory Kings and Shepherds.

Raelee's three lifelong passions are faith, people, and words. She's a tone-deaf music fan and "Mumma" to a young-at-heart, rescued Beagle mix. She has ADHD and ASD, and she is a survivor of childhood sexual abuse. Her favorite thing to write about is the force that saved her life: Grace.


More for the Journey:

Write Integrity Press: Let the Road Trips Begin
Deborah Dee Harper: The Only Thing We Have to Fear ... Getting it All Wrong